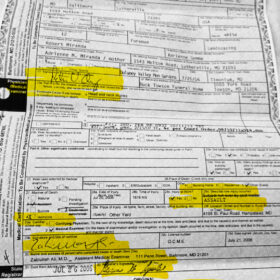 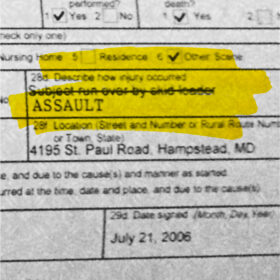 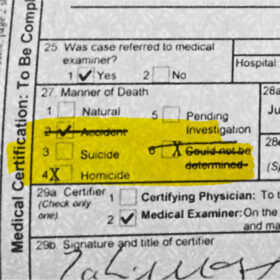 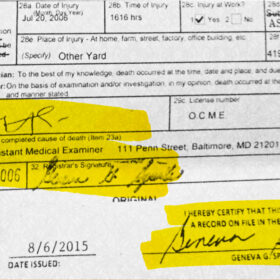 Clearly box to the left is;
X HOMICIDE

To the left is description of how death occurred:
ASSAULT

THE DEATH CERTIFICATE SIGNED AND CERTIFIED BY THE MEDICAL EXAMINERS  – THE RULING IS “A HOMICIDE BY ASSAULT.”

An assault alone is a crime; it is a felony. And to the point of death is a murder. 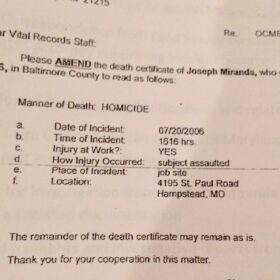 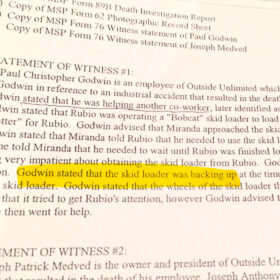 Paul Godwin says “the skid loader was backing up” at the time of the incident.

Everything proves the bobcat (skid loader) was reversing at the time Joseph was crushed to death.

The back up tire tread marks, the left rear tire ends up behind Joseph’s left shoulder against his armpit, there was undisturbed brain matter in front of my son’s skull and the driver says he was backing up at the time Joseph was killed.

Then, later, Paul Godwin changes his story four times and conjures up asinine and impossible stories saying that the bobcat was moving forward at the time of the incident.

We feel that he is a compulsive liar and he killed Joseph.

Then we have the Baltimore County Prosecutor, Scott Shellenberger, saying he opposes the expert ruling by the medical examiners of a homicide by an assault.

And Scott Shellenberger says the Bobcat was moving forward when Joseph Miranda was killed and that Joseph jumped up on a tire and fell through.

Shellenberger is purposely blaming the victim and lying about the proven and visible facts of the case.

This is all so despicable and unconscionable. 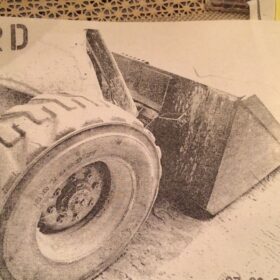 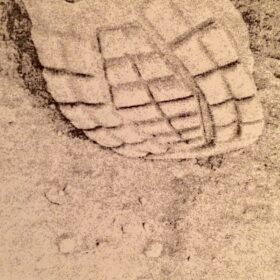 4 inch drag mark behind Joseph Miranda’s right foot as he lay dead.
The police say, clearly the victim was moved; who moved the victim and why?

Joseph Patrick Medved, the owner of Outside Unlimited Inc. was allowed by the police to get inside the yellow crime scene tape for over two hours with a broom.

This is disturbing a crime scene and it is a felony.